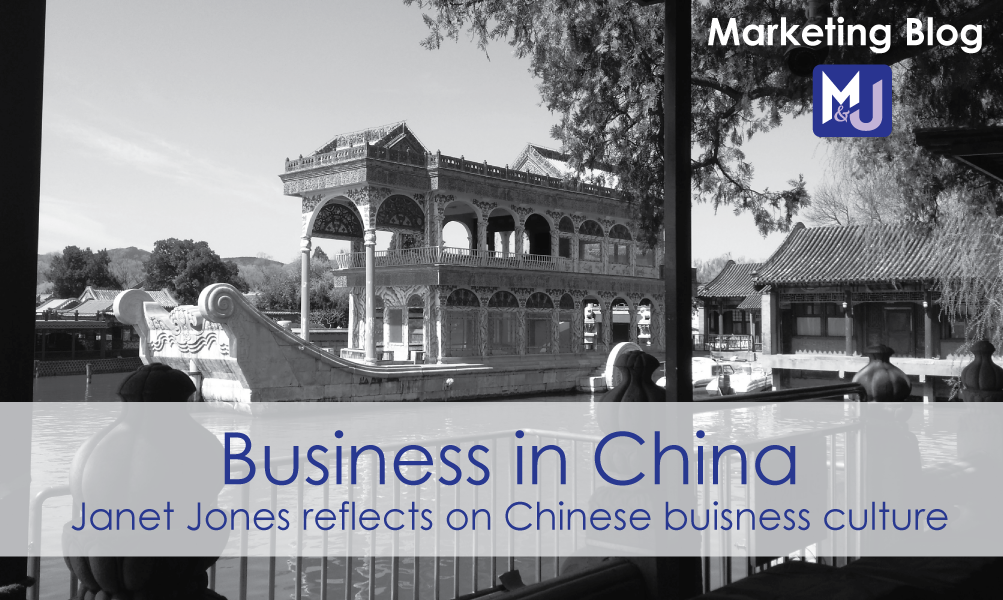 Welcome to Beijing airport –  to the echoing arrival halls, empty escalators, feather duster wielding staff and military style march of workers – it wasn’t exactly what I had in mind when I left Heathrow. I wasn’t expecting Little Britain, but the differences in the Chinese culture did come as something of a shock – but not in quite the way I had anticipated.  I had been expecting a mass of humanity pouring through the Beijing city streets under an oppressive cloud of smog. Instead we were met with clear blue skies, an eerily empty airport and a moderate rush hour crush on the underground which was nowhere near as busy as the London Tube.

I was part of a university team checking out an Anglo-China media programme so it wasn’t quite the standard tourism experience. We were treated as honoured guests including the formal exchange of business cards, the strict protocol for the seating at a welcome banquet and the intense politeness of all in Chinese academia.

We were welcomed with respect and dignity but with an almost total lack of the Western gloss we have become so used to in our daily lives.   We’ve all come to accept the constant barrage of super-slick marketing and the upbeat attitude of our market-led world, so an insight into a more serious and respectful style of doing business was a useful wake-up call.

Let’s face it, getting a taste for how China’s 1.42 billion people conduct their business can only be a good thing. After all, we are talking about 18 per cent of the world’s population. Obviously it’s a huge country with a wide variety of cultural and business traditions, but it soon became apparent that the traditional stereotype of the inscrutable oriental character still has some basis in reality.

Everyone, without exception, was polite and welcoming but in all parts of daily life there was an element of reserve and tradition which was most refreshing. Parts of the city and the university campus where we were based were Westernised and there was evidence all around of the creeping commercialisation of the Chinese culture.

But in many areas we were treated to experiences which were pure Chinese. A one-day sight-seeing trip took us to the Summer Palace which was built in the 18th century on the outskirts of Beijing as a summer retreat for the Emperor and his court. It was packed with exotic pavilions,  palaces and temples all built to the height of extravagance around a rocky outcrop.  Even the cobbles had patterns and designs and everywhere was evidence of the depth and longevity of the Chinese culture.

The Marble Boat at the Summer Palace

The Summer Palace even had its own lake, bounded by the Long Gallery leading to the only Westernised structure in this World Heritage Site, the Marble Boat.  And it was the only part that looked a bit dusty and out of place.

In Beijing itself we were able to take a quick trip down insect alley where the rows of food stalls were all insect based – some of were still alive. Needless to say, despite the obvious freshness of the food, we didn’t stop for a quick snack. 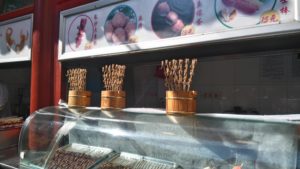 Some of the snacks in Beijing’s ‘insect alley’

Apart from the creepy-crawlies our Chinese food was unusual, varied and delicious although without any hint of dairy content. I had never realised I could miss milk and cheese so much.

Our sight-seeing also took us to Tiananmen Square which was the real jaw dropper.  Its troubled past and the Chinese state’s reluctance to admit to its human rights failures meant that security was tight. We had to show our passports to get in and there were soldiers on patrol everywhere. But the scale of the place was literally awesome.

There were very few Westerners and our group became a tourist attraction in its own right particularly as one of the team was a blue-eyed blonde.  We were surreptitiously filmed by other visitors and eventually stopped by a giggling group of Chinese teenagers and asked to pose for a photo. 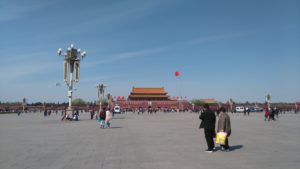 This fascination with the Western way of life is evident across the younger generation, many of whom spoke at least a few words of English. But the older Chinese people were more traditional in their approach with a blunt reserve which would be interpreted as surly in Western cultures.

But I rather liked the lack of the bright smiles and superficial banalities. Even the cool attitude of staff at the departure from our hotel failed to dent my respect for Chinese people.

Before we checked out one of the domestic staff was despatched to our rooms to check that everything was intact and in place.

So there was no: “Thank you for your visit. We do hope you will come again”.  Instead we were sent on our way back to the UK with: “The cleaner says you can go” ringing in our ears. 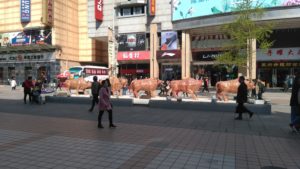